This Sunday past Murdock, his son and I, traveled down to the War Dungeon where another Brigade Fire and Fury battle was being hosted by Nate and McLean. 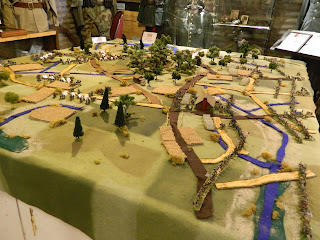 The photo above taken from the south western approach looking down Purdy road towards Shiloh church shows how close the Confederate and Union troops start to each other.

North of the hornets' nest and advancing Confederate army Union troops enjoy a relaxing morning puttering around their tents: 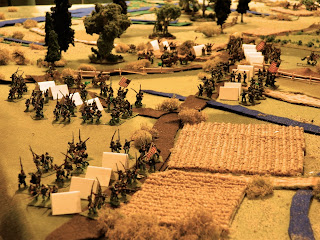 Sherman's troops stationed around Shiloh church are amongst the first to discover the impending attack: 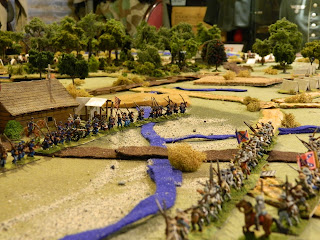 As are Peabody's brigade under Prentiss; they are the first to be pushed from their positions- their Commander killed in battle- falling back in spectacular fashion to the sunken road: 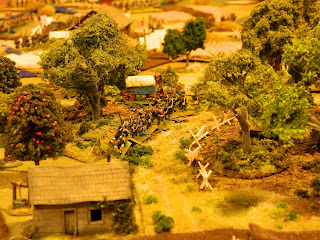 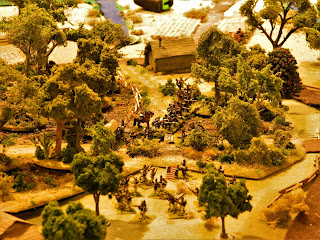 Confederate troops, following up  hit the peach orchard and the outer border of the hornet's nest: 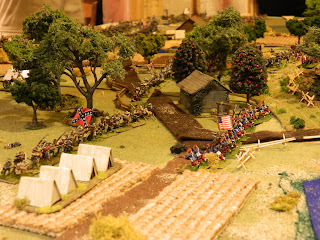 With their comrades fleeing towards their encampments the other Union troops eventually realise that there is a battle in progress: 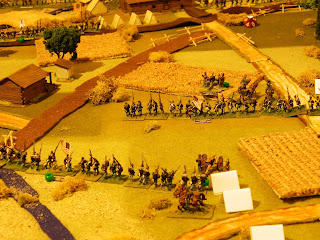 As Union reinforcements start to arrive, marching up both Corinth roads, Peabody's brigade (after offering very light resistance while ensconced in a good defensive position) again flee! In the photo below, Prentiss attempts to regroup them at the encampment while another brigade prepares to advance into the woods in an attempt to re-take the eastern end of the sunken road: 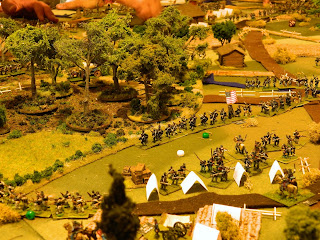 In the foreground, more union troops  under Mclernand form up outside their camp while in the distance, Sherman's troops continue to stall the Confederate advance on the Union right: 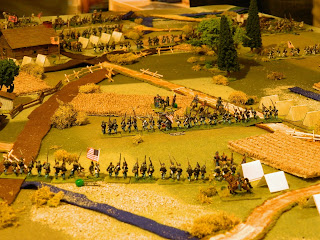 There the confederates are hampered by 'too many officers, not enough troops' syndrome: 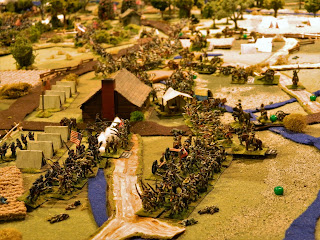 Confederate reinforcements enter the table, headed for the meat grinder that was the hornets' nest: 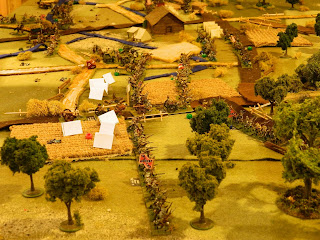 Their arrival helps secure the sunken road and puts them in a good position for the Union counter attack: 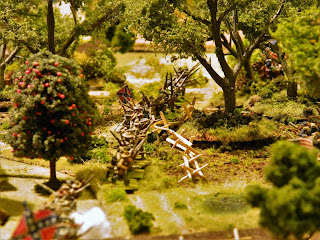 The view from the Confederate left shows them having swept away the last of Sherman's brigades including mortally wounding the great man himself: 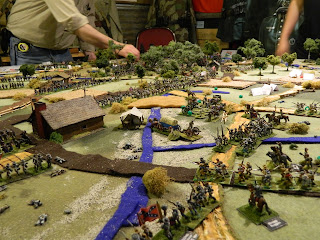 Pulling a page from the Confederate hand book, the union commanders decide to feed brigade after brigade into the hornets' nest in an attempt to push the resilient confederates off of the sunken road: 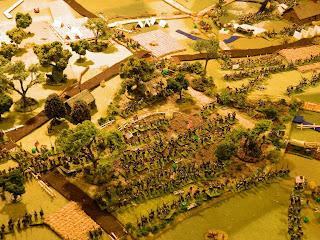 It is at this point we called the game although there were still several more turns to play.  Technically it was a draw but it looked like a confederate victory was very possible. For a complete victory the confederate had to control the sunken road (no Union troops on it) and push to the north-eastern corner of the battle field, essentially corralling union troops against the river. Both sides seem to be playing for a draw as Sherman's efforts on the union right stalled the confederate advance long enough for Union troops to reorganise and reinforcements to get into position. Both sides seemed to be critically hamstrung by dire maneuvre rolls at key times, including a string of them that caused disorder and retiring moves on the union left .

In the end the Union held the western end of the sunken road (but their position there was tenuous at best)  and the confederates held the centre and eastern end (with nearby union troops reeling in disorder): 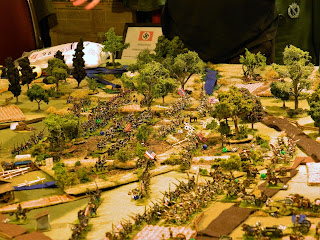 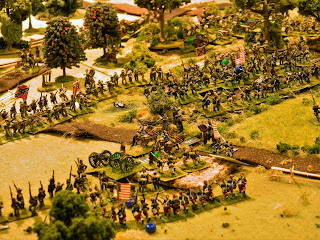 In a similar vein to our Battle of Gaines Mill the terrain really dictated how the battle would be fought and, indeed, played out in nearly identical fashion to the actual event.