Terrain For an ECW Game

With an upcoming game of Pike and Shotte using our ECW armies, it is my turn to devise a scenario and forces. After choosing a scenario from a Partizan Press book- the battle of Denbigh Green- I came to realise that I had very little ECW -specific terrain. The scenario calls for hedges, a church and a ruined priory. Although I had large batch of unfinished hedging from Jeff I didn't have either a priory (ruined or otherwise) or a church. I do have some Bolt Action plastic ruins and a foam Ziterdes Mill House, a decent size structure; these would have to double as a ruined priory and the church.

Although the mill house comes half painted (primed in 2 colours?) I decided to spend some time on it, painting the daub, wood and stonework. 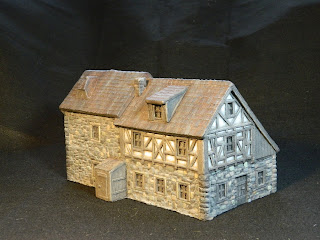 As you can imagine, the detail isn't as crisp as resin however still quite easy to paint. 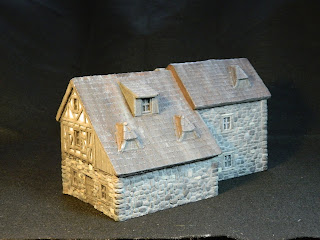 The sculpting of the stone walls is really well done; the roof looks to be wood shingle but doesn't have the wood grain texture of the windows and beams. Also, it came primed a rust red so perhaps it is supposed to be slate. 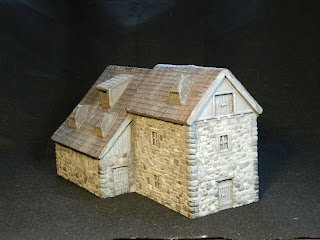 When Jeff passed away he left me about 14' of  hedging made from Scotch Brite scouring pads. I primed them, flocked the pad material with a mix of Scenic Express SuperLEAF material, then based them with my ECW basing blend (a variety of Woodland Scenics fine turf and static grasses). 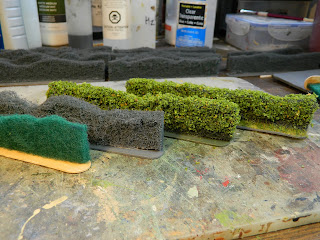 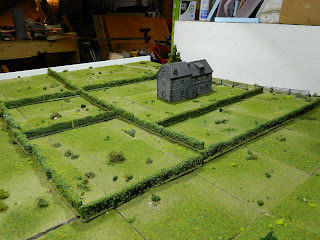 Yesterday I started on the ruined priory. I only had a few pieces of  the Bolt Action ruins so I made do and added a Italeri stone wall that I had started painting earlier. Hopefully by next weekend this will also be finished. 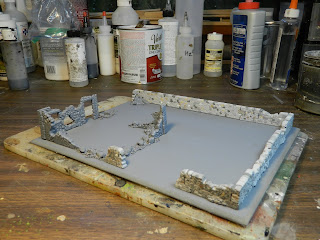