The first piece for The Angry Piper's Terrain Challenge is complete. 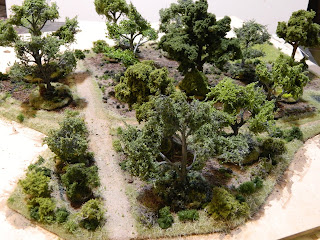 The trees were mostly made before hand; the base for the Hornets' Nest was the focus of this part of the challenge: 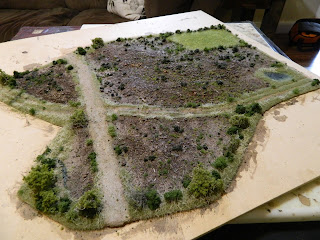 I glued some thin cork sections down, in two layers; smoothed the transitions with drywall mud before a light sanding and then my patented mix of sanded grout and vinyl tile adhesive was smeared all lover it. Careful to avoid the roads (but I forgot about the Bloody Pond) , I sprinkled ground fir bark on top and pressed it firmly into the grout/adhesive mixture while it was still wet. Once dry a layer of watered down white glue to seal it and then a sprinkling of Woodland Scenics dark foliage for light undergrowth.
Then some 2mm static grass, followed by brush and bushes to finish it off. This view shows "bloody" pond with the Sunken Road running along side of it: 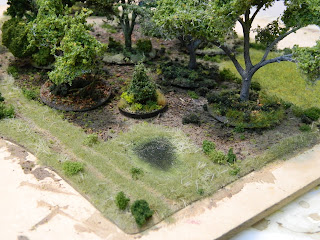 Wicker field in the north-east corner of the piece: 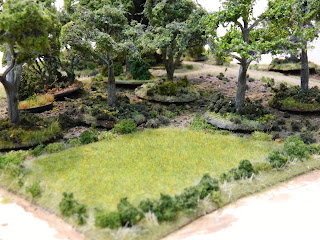 Looking north, up the Eastern Corinth Road (the intersection with the sunken road just visible in the middle of the picture): 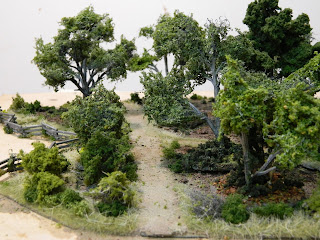 Looking north west along the sunken road, it bends to the right behind the trees, after crossing the Eastern Corinth Road: 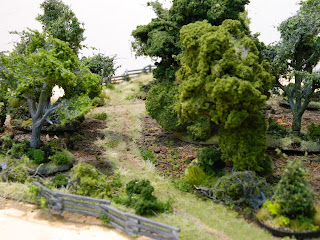 I think I may make a couple more snake rail fences to demarcate the boundary between the hornets'  nest/sunken road and Duncan's field. Not entirely necessary though as I have some made up, they are just a little long.