After a nearly year long layoff from playing games face to face, Murdock and I were able to resume our campaign series from Partizan Press' English Civil War Campaign Scenarios, Vol 1. After Stoke Lane the next scenario in line is the Battle of Monkton Farleigh.

With the Royalist army advancing on Bath and controlling the main bridge over the Avon at Bradford-on-Avon, Waller had a bridge built across the river near Claverton and sent a flanking force across it led by Col. Robert Burghill. He deployed the main body of the army on Claverton down (I should note here that Google maps has Monkton Farleigh just under a kilometre and a half to the east of the Avon and Claverton to the west whereas the map in the scenario book has them on opposite sides of the river. Given the distance from the Avon to the village, you could play this game without the river or the outskirts of Monkton Farleigh on the table.) 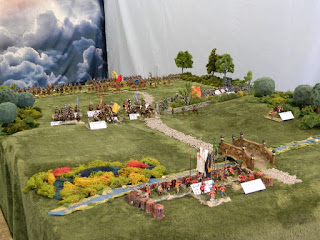 Although this is an attempt at an ambush by Burghill's force, the Royalists are aware of it and have sent a force under Prince Maruice with Col. William Godolphin supplying reinforcements.
The view of the Prince's army from Monkton Farleigh hill: 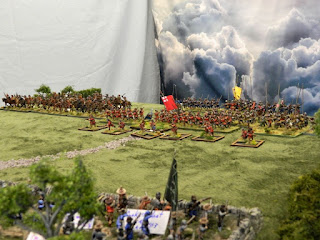 The bulk of Burghill's infantry and 2 light guns set up in a strong defensive position in a walled enclosure: 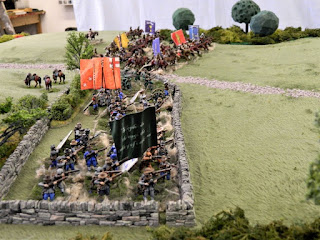 Early on the Royalist skirmishers are sent packing and the horse of both sides on the Royalist right eagerly rush forward into contact while the Earl of Carnarvon issues orders (mounted figure on the extreme left): 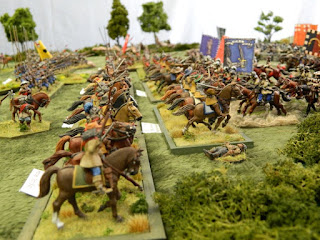 Col. Trevanion's regiment of foot leads the way taking the bulk of the fire from the defenders: 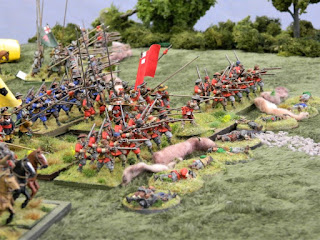 Eventually they are forced to retire, allowing the newly arrived Godolphin's foot to take their place. They soon suffer much like Trevanions: 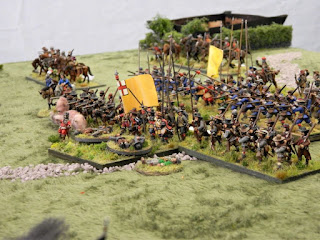 With Godolphin's and Hertford's foot stalled, the combined regiments of Col. Buck's and Prince Maurice's moves out to the right, forming a semi circle around the defended enclosure and the light gun is unlimbered. In the distance the Royalist horse have forced their opponents back, however, despite repeated charges, they are unable to inflict enough damage to force them off the table or break the command. Instead it was the Royalist horse that was spent: 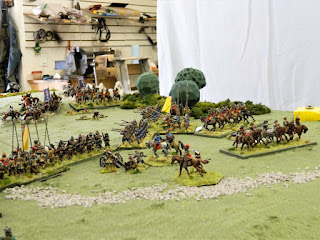 Still, the defenders hang on; 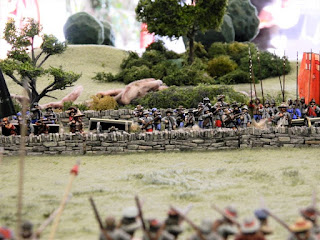 Parliamentarians continued to rally off Shaken markers and fight Disorder while the Royalist large veteran regiments soaked up the hits and use their Elite status to shed Disorder. With only two turns left it came to the final push; the Royalist infantry closed in on the defenders: 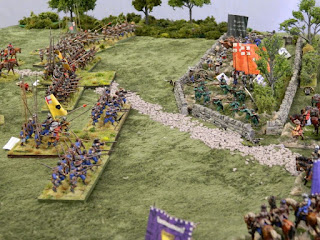 Alas for the Royalists, despite their best efforts they failed to make any of the defenders run and in their turn the Parliamentarians finally managed to force the pride of the Royalist force to retire, immediately followed by Prince Maurice's and Col. Buck's. With that, the foot battalia was broken and could not fight anymore.
A different outcome from the actual battle. In reality, the Royalists forced the Parliamentarians out of the enclosure, back across the Avon capturing their guns in the process.
Right up until the last two die rolls of the game (both Break Tests which were promptly failed in spectacular fashion) it felt like the Royalists could drive the rebels off. I never got to fire my ordnance as it was continually masked by my foot regiments so I could have done better there.
For those that are interested we used Warlord Games Pike and Shotte rules with unit stats from the To Kill A King supplement. Standard units consisted of 6 stands (24 figures); Small units of 3 stands (12 figures) and the Large 9 or 10 stands (36-40 figures).  All 4 of the Royalist foot regiments were Large. The horse on both sides were Small as the horse regiments involved were broken down into two divisions each.  The units marked out as Veteran in the force listing received the Elite 4+ and Steady special rules, Units marked as Raw got the Wavering special rule. The Parliamentarian Dragoons had Firelocks.
Posted by Codsticker at 13:16