I got a bit side tracked here- for this post I am rolling back the timeframe a few hundred years from the English Civil Wars to the 11th century. 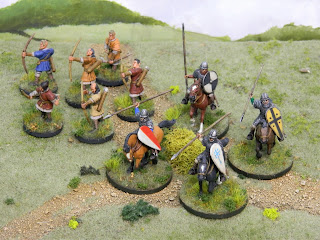 Many moons ago I picked up some Conquest Games plastic Normans in part because 28mm plastic kits for historical war games was just starting and I went a little crazy (I still have several boxes for various periods I probably will never get around to playing).  Most of the Conquest Normans got some conversion work and ended up recruited into some petty kingdom in Al Andalus during the Taifa  period. Some of the leftovers are presented here. 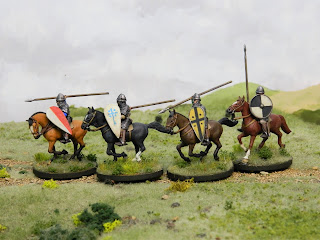 The mounted Norman Knights kit was Conquests first plastic set and at about a decade old suffers from some of the faults common to early plastic kits- obscured detail, stiff posing- but still holds up well. In Saga terms these four horsemen are a unit of Hearthguard. 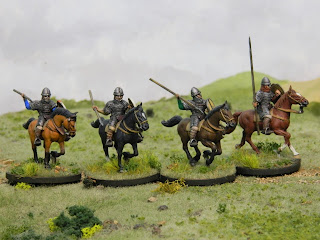 Conquests Medieval Archers kit is an improvement in sculpting from both their Norman Knights and Norman Infantry box sets. These 6 are a half unit of levy archers (the other 6 still under construction). 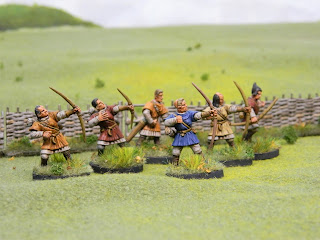 The only big problem for this kit is Conquest's head design. The head has a "foot" at the bottom of the neck where it is meant top be glued onto the torso. You get a good solid gluing surface but it looks weird as it only fits naturally if looking directly ahead, and not if you want the head looking in the direction the archer is shooting in. Some head /torso combos work better than others. 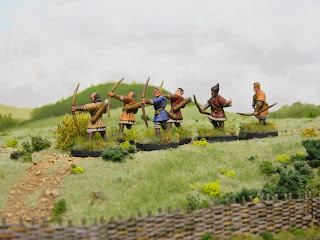 I had another set of Renedra's wattle fencing which I took the opportunity to paint up; very handy stuff to dress up the medieval or renaissance war games table. 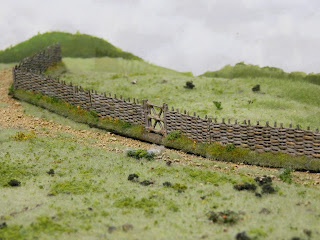 Now back to tidying up that ebay purchase of ECW figures...
Posted by Codsticker at 19:17