This past June I found a Canadian selling some second hand ECW figures on ebay. It's pretty rare to see such a thing. Although not a steal, the price was OK, and I knew I would have to tune them up a bit to fit them into my collection. It proved to be a little more work that I thought but in the end acceptable. 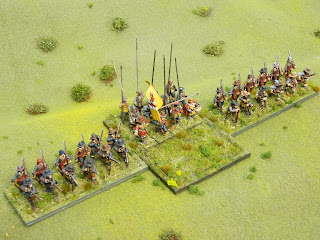 The figures were from a mix of manufacturers; the picture below gives you an idea of the painting on the minis and the different ranges. Whoever painted many of the figures did very little to clean up the castings before starting; lots of mould lines and bits of flashing were painted over. 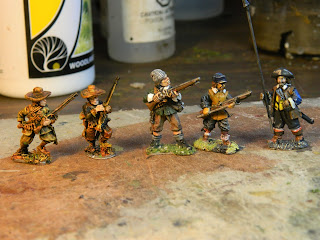 I believe we are looking at (from L to R) Old Glory, Old Glory again, Renegade(?), Redoubt (?), Perry.
I think the bulk of the musketeers in this wing are either Old Glory or Redoubt, with a couple of Perrys  in the front rank and possibly one or two in the rear rank: 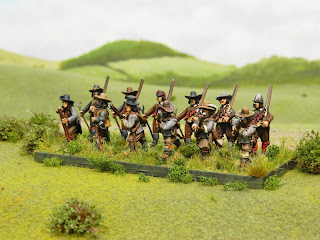 The rear rank of this wing is mostly Perry: 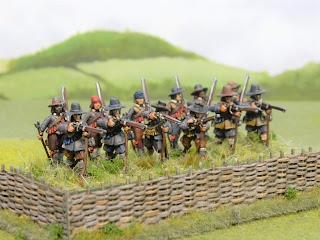 The pikemen are mostly Perry; I am unsure of the command figures : 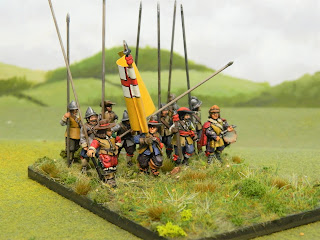 One of the pike bases is made up of new figures. Just for shits and giggles I decided to put figures from 4 different manufacturers on one  40 mm base; we have - from left to right- 1st Corp, Avanpost, Perry and Warlord Games. 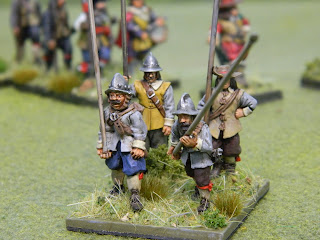 The large size of the 1st Corps figure and distinctive sculpting of the face makes it stand out when compared to the others at close range. The Avanpost figure is resin with sharp, fine detail but is quite fragile (I broke his scabbard when assembling him). I loved painting the smooth finish of the resin. I think that perhaps the Perry moulds are getting a little tired; the casting was a little rough in spots with flash, some minor pitting and, what I can only describe as, lead 'lint'.
However, at gaming distance the large size of the 1st Corps figure, the poor prep from the previous painter and any other minor issues are not even noticeable. 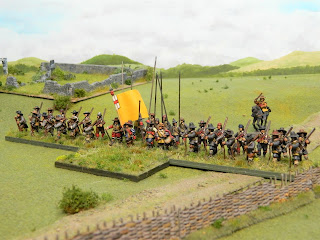