A new terrain project underway. After the two games of Brigade Fire and Fury- days 1 and 2 of Gettysburgh- our industrious host has expressed an interest in putting on a Battle of Gaines Mill game. He said he needed a couple of large hills and I happily volunteered.

The key feature is a long hill that I have divided up into three large hills for ease of construction and transport. The hill is split by a gully that runs from south west, incorporating Boatswain's Swamp in a north-eastern direction towards old Cold Harbour as seen on this map:

The union defenders are dug in on the north-western flank of Turkey Hill; the Confederate attackers on the hill opposite, Boatswain's Swamp and an un-named creek between them.

After spending the am hacking away at styrofoam insulation I am at this stage: 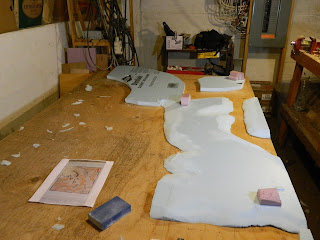 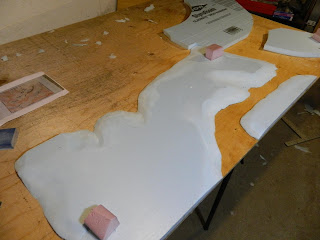 These pictures show two of the main hills; pictures from the north-east, looking south-west. The purple blocks represent where buildings will go: Old Coal Harbor at the bottom, New Cold Harbor in the middle and Gaines' Mill in the upper right. The carving of the hill section at the bottom is largely done; the second part beyond new Cold Harbour is roughly cut out, as is the hill that Gaines Mill is on.

I have to get more foam before I tackle Turkey Hill.
Posted by Codsticker at 15:50