I played my first American Civil War wargame this Sunday. The day was organised by Nate and played in the same classroom that our Napoleon's Battles game was hosted in (see here if you missed it). The rules used were Brigade Fire and Fury, on a 5 by 5 table in 15mm.

This initial photos show the advance element of both Armies in the south-west corner of the table; Confederates on the left, Unionists on the right: 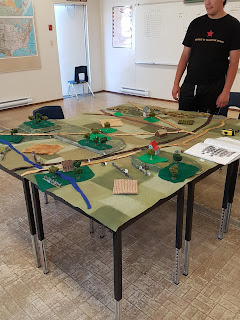 In the opening moves, the Rebels force the Iron Brigade back- just behind the house in the lower left of the first picture where the viewer can't see them: 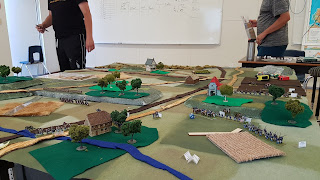 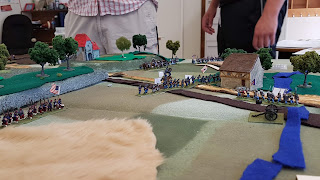 Rebels on the table edge advance aggressively and hit the union forces hard: 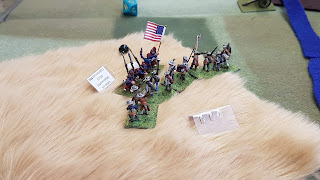 Union cavalry advance along behind the ridge, hoping to get into position before more rebel forces enter from the Northern edge: 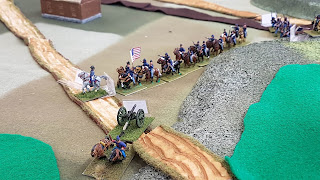 At this point reserves from both sides starting pouring onto the table. Here Pender's brigade gets some good maneuvre rolls to lend support to Heth's brigade: 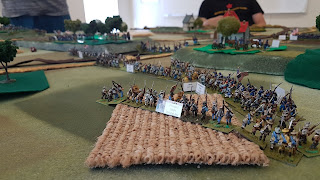 Further north along the ridge the rebels have pushed the first line of union forces off the flat and assault the ridge: 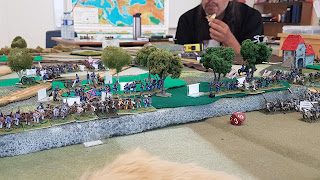 Sadly for the Confederates, their assault is repulsed and the Union brigades defensing the ridge chase them back down the hill: 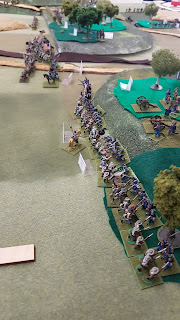 Eventually, the Unionists are repelled and eventually unable to withstand a second assault;  Scales brigade gains the ridge as do brigades from Heth's division (the bottom of the picture above; just off to our right in the picture below): 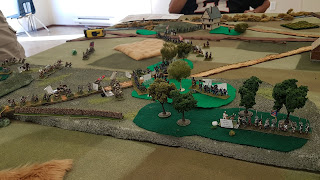 With Confederate brigades in firm control of the north end of the ridge... 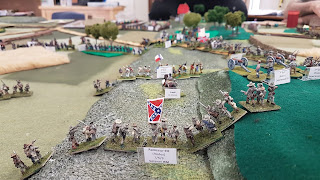 ... we called it a game. You can see the ridge occupied by confederate soldiers (the view in the picture below from the northwest corner) with Union soldiers considering an attack. What you don't see is another Confederate division that has just arrived in the northeastern corner and starting to grind into the far flank of that line of blue coats in the upper left of the photo: 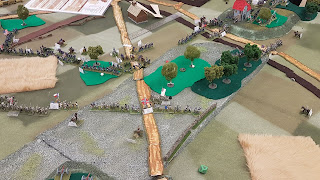 The consensus was that a Union attempt to retake the ridge would be too costly if successful and the most likely scenario would be the tattered remnants of  the Confederate army retaining it.

As a newcomer to these rules I found them quite easy to pick up. With a few exceptions we were able to play on without the guidance of the host who (I believe) was the only person present who had experience with them. I look forward to the possibility of another game in August