It seems a necessary piece of table top dressing for any ECW campaign is a little old English church. For some time now I had the intention of building or buying one; in the end I settled for a  MDF kit from Warbases, although I have added quite a bit to it. 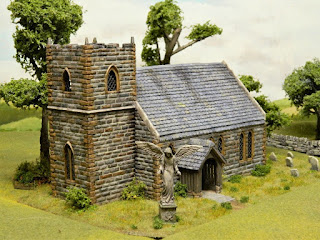 I essentially used the MDF kit as a starting point, a frame onto which I added 3 main  extras:

Here we have it before the customisation: 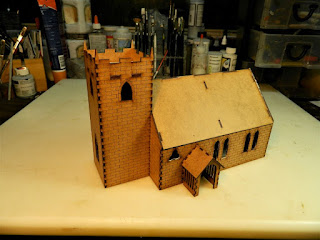 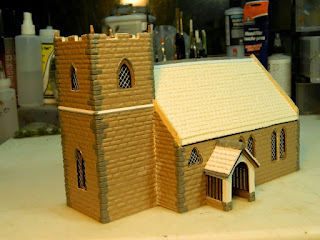 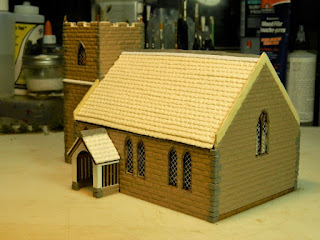 I didn't use the windows that came with the kit but instead I glued drywall mesh to the inside of the building and painted it black. 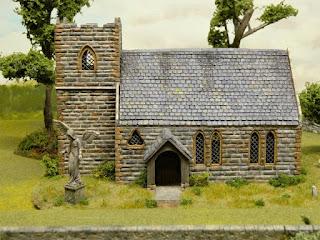 For the front of the entrance I glued sheet styrene, textured with a craft knife to represent wood, to the MDF. The walkway is foam pavers. 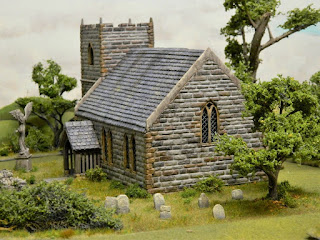 The tree is a plastic Woodland Scenics armature with my standard foliage recipe. The most time consuming part of the build was making the roof. I wanted something that was a bit more 3D than the paper offering and although the slates did come out a smidge fantasy I am quite happy with them. I made two moulds so I will be able to make them up quickly should I decide to make a similar roof later. 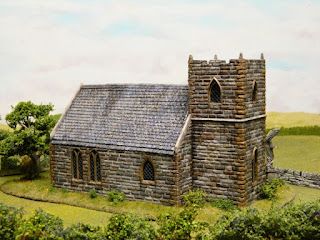 I'm not 100% confident in my colour choice for the quoins; in the end I am satisfied but I think If I was going to do it over I think I would go with something a little more tan, a little less yellowy orange. 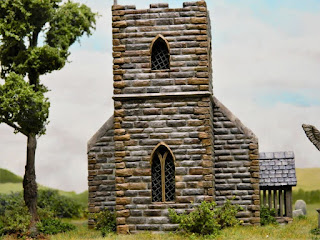 I cannot recall where I bought the statue; I originally bought it for my Mordheim project and had forgot about it- I just remembered it yesterday- but it is a beautiful little piece of work. 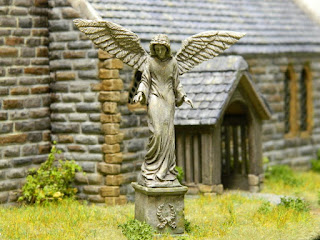 What's a church yard with out grave stones? These ones are simply made from XPS foam. 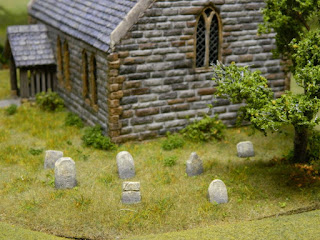 One of the reasons I chose the Warbases kit is that it has a small footprint on the table. I think if I was building it specifically for skirmish gaming I would have gone with a bigger kit, like Sarissa Precision's church. 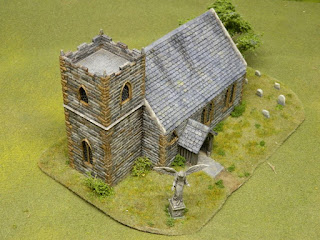 Hopefully there won't be such a long break between posts through the next few months. Works slows down during winter and I have some ECW figures lined for the Analogue Hobby Painting Challenge which starts in about two and a half hours.
Posted by Codsticker at 21:32