Having had these plastic Normans laying around for almost 10 years I figured  the AHPC was a good time to put them together and get them painted. 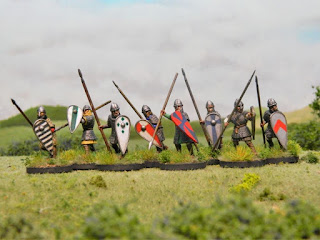 In Saga, Normans on foot don't get much benefit from the Battleboard abilities unless they are armed with missile weapons. Although they cannot gain advantage from the Battleboard Flemish mercenaries are a solid defensive unit; for those that are interested, their rules can be found here.
Four of the Flemings were constructed straight from the components of the Conquest Games Norman Infantry box set. Very straight forward: 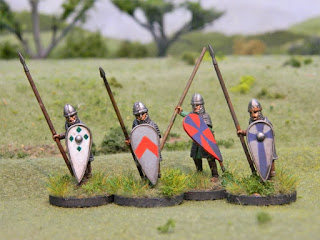 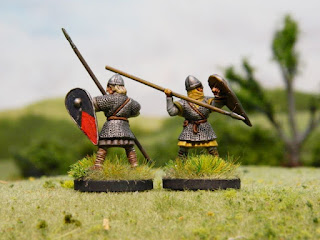 Arms with spears and shields from the Norman Infantry set. 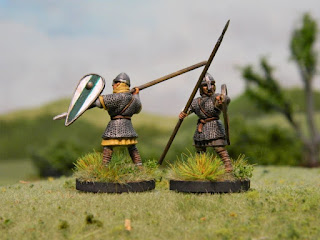 My preference would have been for all the Flemings to be in mail but I ran out of bodies so attired and had to make use of  two in padded jacks. 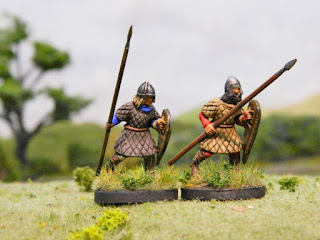 Both of these figures have heads from the Medieval Archers kit; arms with weapons and shields from the Norman Infantry set as per usual. 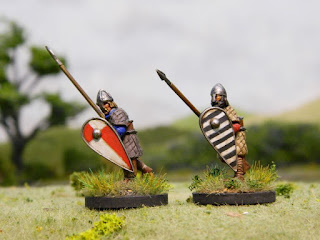 All shields were hand painted. Although most of them turned out OK, a couple of them did not. I think in the future, unless it is a dead simple design, I will be using transfers as I did with my Taifa kingdoms miniatures.
Posted by Codsticker at 19:30