I am still waiting for my order from Warlord Games (usually very prompt) so I was working through my collection of kits and re-discovered a Renedra Ramshackle Barn. I had done one up for my urban Pulp Alley table (here for those that are interested) but decided to send this one back in time to the 17th century by exchanging it's shingle (or possibly tile roof) for a thatch one. 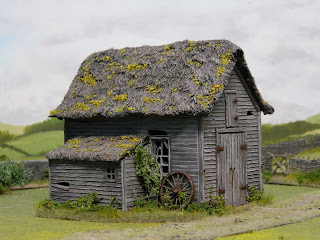 Although tile would have been acceptable for the period, the other rural buildings all have thatch roofs so I thought I would try my hand using the war gamer standard, fake fur. 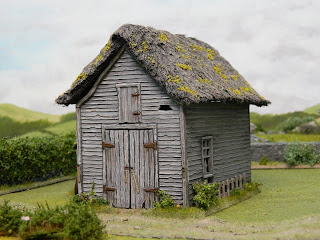 I am not 100% happy with the result; I was hoping I could manipulate it so that it resembled the thatch roof of the Perry cottage. 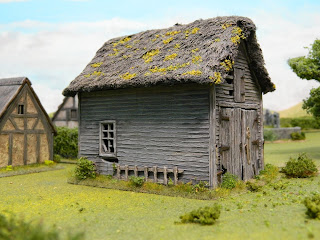 However, given the barn is "ramshackle" I figured the rough look of the thatch represents the ill maintenance the building has suffered which the greenery in the thatch also shows. Speaking of the Perry Miniatures cottage, I decide to use the wattle fence that came with it to make a pinfold. 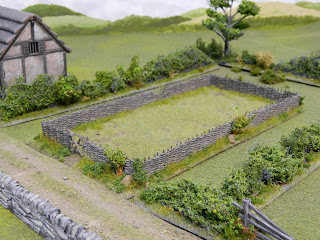 The idea was shamelessly stolen from Silent Invader's thread here (pinfold on pg. 13) on the Lead Adventure Forum. 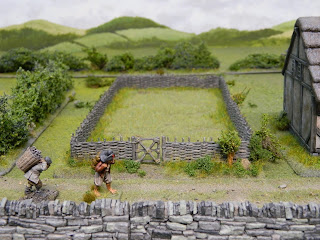 For those wondering what a "pinfold" was it is the same as a "pound" where stray animals were kept until their owners could afford to pay for the damages the stray/s had done or it/they were sold to cover such costs. 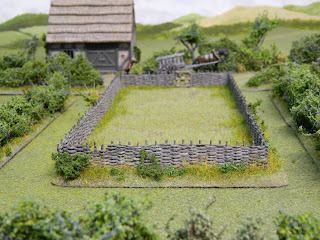 Now back to postal box watching....