Murdock and I got together yesterday evening for another game of Carnage and Glory II: ECW. For those that don't know C&C is a computer moderated set of horse and musket rules with modules for ECW/TYW, ACW, GNW and- of course- Napoleonics. Our previous games can be found here and here.

Charles is moving his forces north, hoping to rest and water the horses at the village of  Lesser Smegbottom but have been found on the move by Fairfax's army and is forced to deploy. 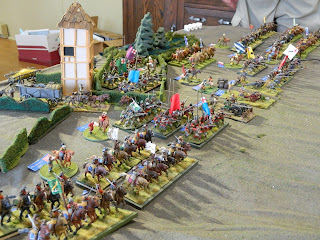 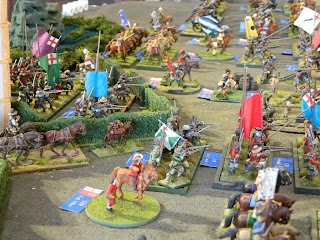 The untested artillery of Evesham, Shrewsbury and Worcester deploy to the front under Sir James Ordillery: 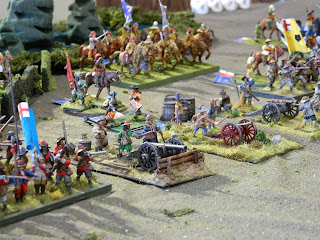 On the far side of Lesser Smegbottom the the Old Cuckold's army can be seen marching at double time to get to occupy the village: 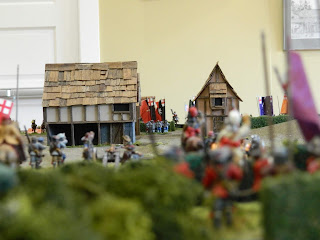 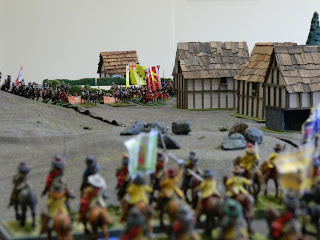 With Parliamentarians firmly ensconced in the village, Ordillery orders his artillery to keep them there, which they were successful in doing: 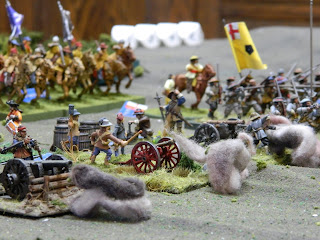 On the Royalist right wing, the Parliamentarian Horse take a page from Rupert's book and charge pell mell into Lord Byron's brigade of horse: 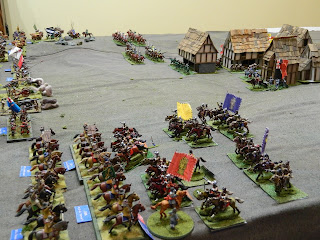 At this point there quite there is few turns of cavalry running back forth; pursuing, halting, regrouping getting charged, falling back etc. The end result being 3 regiments of horse from Byron's brigade vacating the field; however, the exhausted Parliamentarians found themselves immobile on front of Henry Tilliers supporting brigade of foot and charged by the remaining unit of Byron's horse: 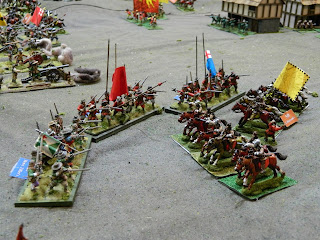 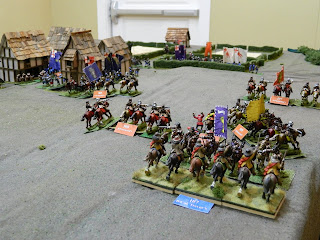 It was too much for them and the whole brigade found itself retiring, despite the best efforts of their commanders to rally them.

On the left wing, Rupert recognised the potential for disaster and provided inspiration by leading Sir William Vaughan's horse in a counter charge to slow down the oncoming enemy: 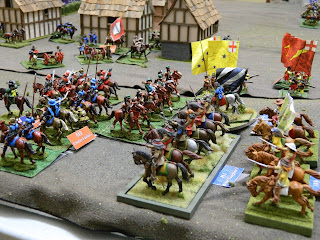 Successive pursuits and melees, each resulting in a defeated enemy, eventually wore down the unit to the point that it retired to the rear to regroup.

It didn't matter though; with the collapse of both Parliamentarian cavalry brigades, other Royalist horse units followed up and closed in on the enemy infantry in the centre (the Royalist regiment below carrying the captured standard of a surrendered Parliamentarian foot regiment): 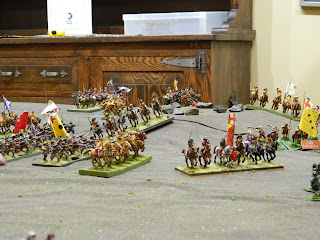 With most of the Royalist army now closing in on Lesser Smegbottom,  despite still being in relatively good shape, Fairfax chose to retire from the field, allowing the King's army to continue on: 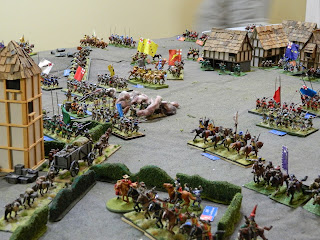 In Carnage and Glory, victory/defeat is determined by which army has it's Morale rating drop to a certain percentage, the default being %75. In this game, on turn 8, the Parliamentarian force had dropped to 74% while the Royalists had dropped to "only" %76; a very marginal victory. In reality I imagine that the Royalists would have halted unable to continue and would certainly not have advanced or pursued the vanquished.

Our initial game of C&C had me questioning how the system dealt with cavalry charges as in the vast majority of cases charging units were repulsed and then pursued and routed but this game showed that it was just a one-off: ie, the computer rolled weird in our first game.

This game does a really wonderful job of modelling fatigue and morale and how it affects movement and combat; it would certainly be tedious to try to replicate it in a traditional war game format. Despite that, this game really needs a referee to be played in a reasonable amount of time as info has to be entered into the program which results in a fair amount of dead time if one of the players is doing that. We arrived at the space at 5:30 PM , set up and shit-shooting took two hours before first turn and we were out the door, on the way home just after 2:00 am. So... not "fast play", even with the program doing all the mental heavy lifting. We did have a lot of units on the table though: a total of 24 for the Royalists, not including Generals and such.