Trumpeter's Salute came and went this past weekend and we had quite a bit of fun. The game was a success and we had the right players sign up for game, doing things we didn't expect which both Murdock and I found entertaining.

I did manage to finish the corner building: the walls are- as usual-  Firedragon Games impressed styrodur cut stone walls, the roof structure made from a a variety of hobby wood products and then roofed with laser cut card shingle strips from Warbases (I believe). 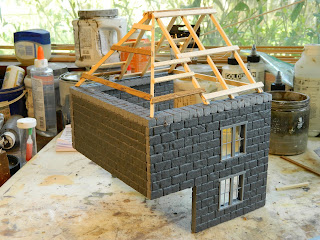 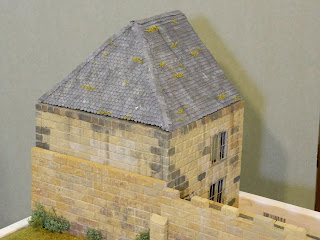 The windows are Tichy Train Group O scale windows. Very nice product but a little over sized and modern for 28mm renaissance miniatures. Unfortunately the windows I had ordered for this building didn't show up until Friday. 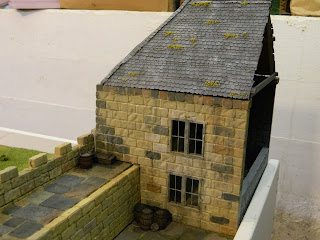 The 'real' building at Rockingham castle has no windows on either exterior wall and is actually a little narrower acrosss the wall and a little taller than my structure but I wanted the width to fit the wall section and the height was limited by the stone pattern styrodur I had available. 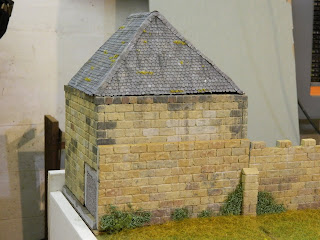 As for the game I didn't get quite as many pictures as I wanted; my tripod broke right after I took the above pictures and haven't had a chance to replace it before leaving for Burnaby. I had to borrow Murdock's tripod when I could and when I was at the table I was helping run it, answering questions and that sort of thing and if I had a chance I went to  look at some of the other tables.
Early on in the siege, Colonel Marsh's men start their sapping operations (powder train n the background). The cards show the attackers plan on some action (unknown to the defenders). These could be either Entrench, Assault, Cannonade, or Stand Fast; some are also bluffs so that the defenders can tell something is going on but not exactly sure what. 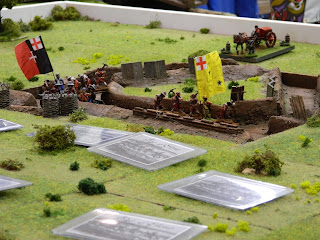 Murdock's rules dictate that men from the regiments are picked to do the digging. The flags in the trenches with the engineers show which regiment is supplying the men. This is important because if the defender's sally these regiments are unavailable to fight. 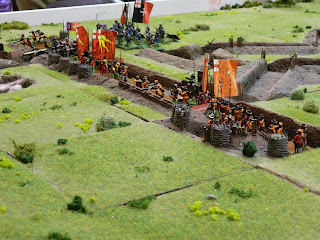 The Parliamentarian commander's view of the battle: 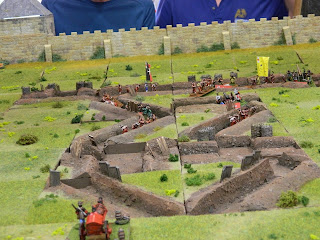 At this point the nervous defenders sally in force in an attempt to drive off the attackers: 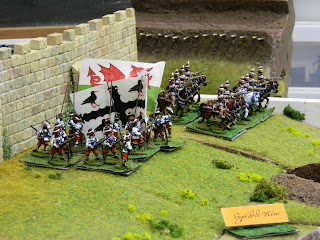 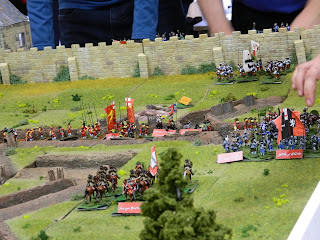 Despite some success, they are unable to prevent the attackers from reaching the wall and assaulting it: 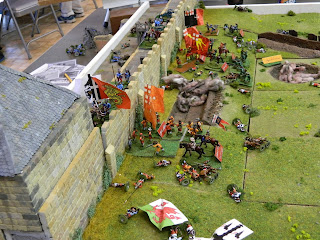 We had a few suprises such as exploding mines from the defenders: one was devastating the other not so much. I think, historically, neither mine would have been used as we allowed them to be used in this game but they were entertaining and caused some consternation to the attackers. Like the last couple of games this one came down to  the last couple of die rolls with Parliamentarians gaining the victory, in this case by noon on day 6, well before the relief force was to arrive.


For a many more and better pictures and a little more detail I suggest you visit Murdock's Marauders.