Command Stands and The Battle of Glastonbury

This past weekend Murdock and I got together for our second game in our campaign, the Battle of Glastonbury, from Partizan Press' English Civil War Campaign Scenarios Vol. 1.  In preparation of this game I put together some command stands to represent specific commanders. For the duration of the campaign these stands will represent these commanders. As new commanders or generals are introduced they will get a specific stand- no more generic stands!

At Glastonbury the Royalist Infantry was led by Col. John Trevanion, taking direct charge of the right division.  Serving as an MP before the civil war, Trevanion would not see the end of it, dieing at the siege of Bristol just 6 weeks later. 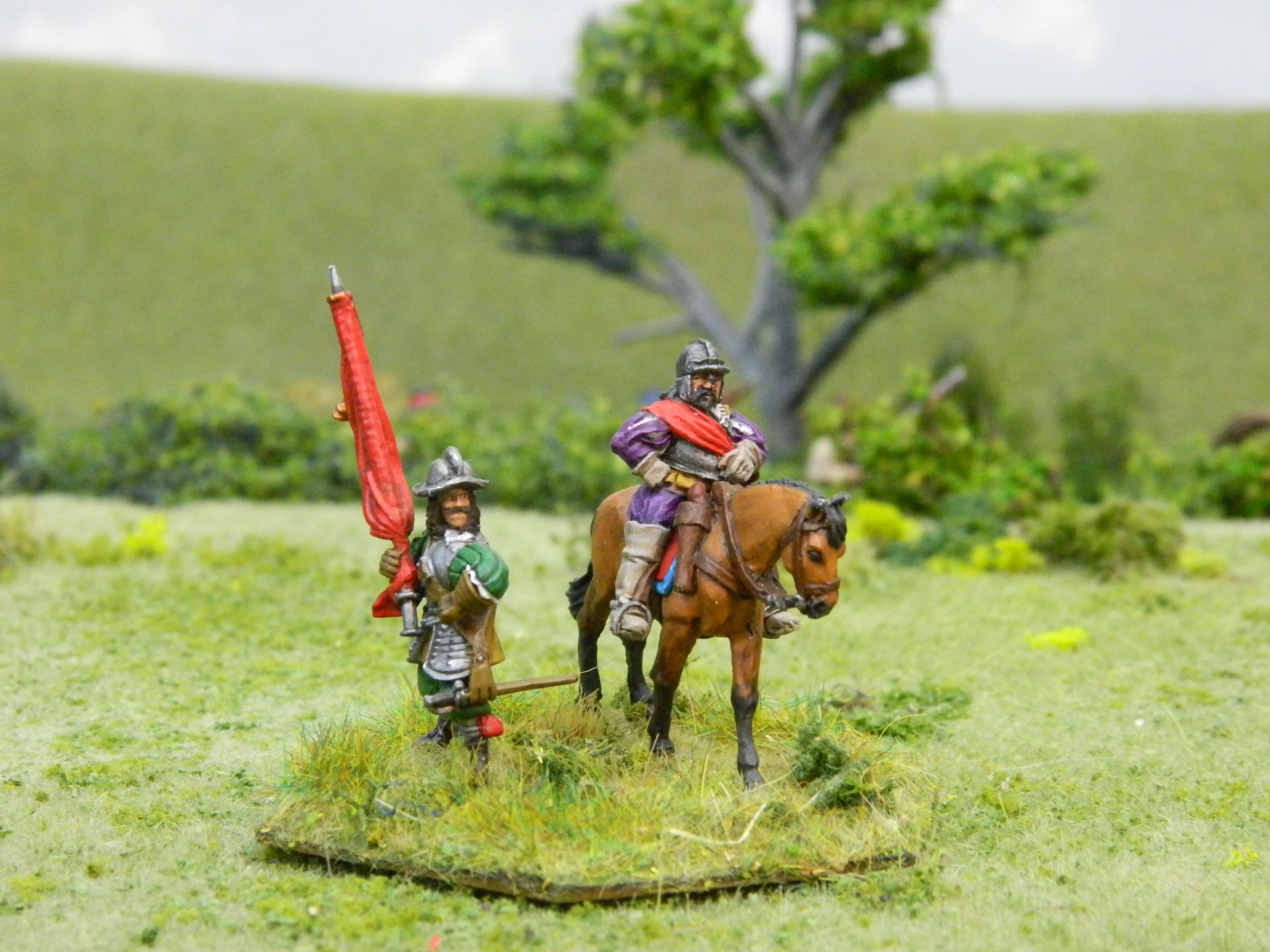 The left division fell to the command of Col.William Godolphin. Before the civil war he was also an MP but unlike Trevanion he would survive the war and live on to see the restoration of Charles II. 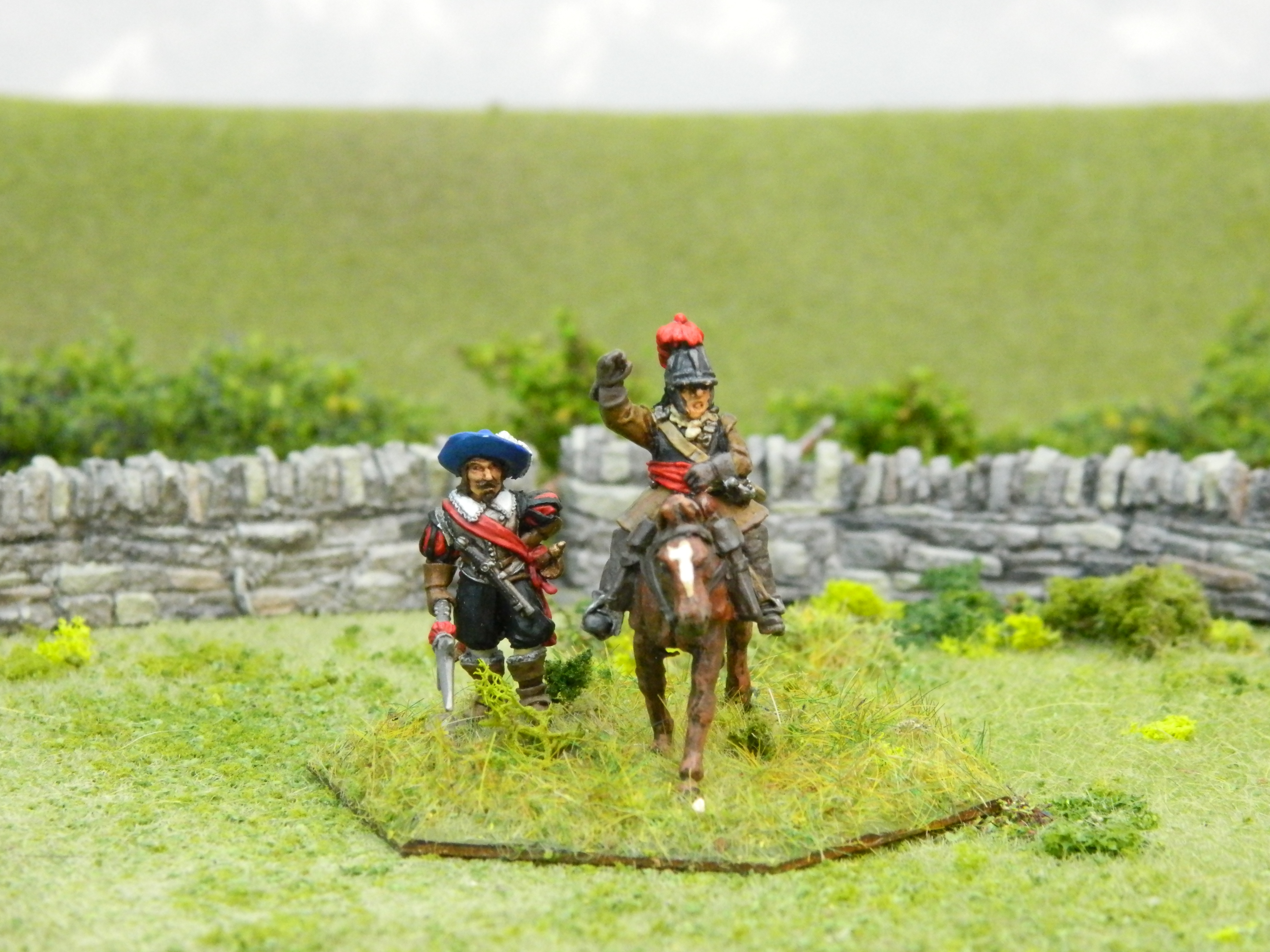 Lord Hopton's cavalry, divided into a left wing and a right wing,  was led by Robert Dormer, the Earl of Carnarvon. He entered the war with previous military experience, leading a cavalry regiment in the Bishop's Wars. One of his achievements was to secure the surrenders of important towns in Dorset after the fall of Bristol by offering generous terms, only to have it undone by undisciplined royalist troops plundering. In protest he gave up his position in the west to join the King's army. He died later that year at first Newbury. 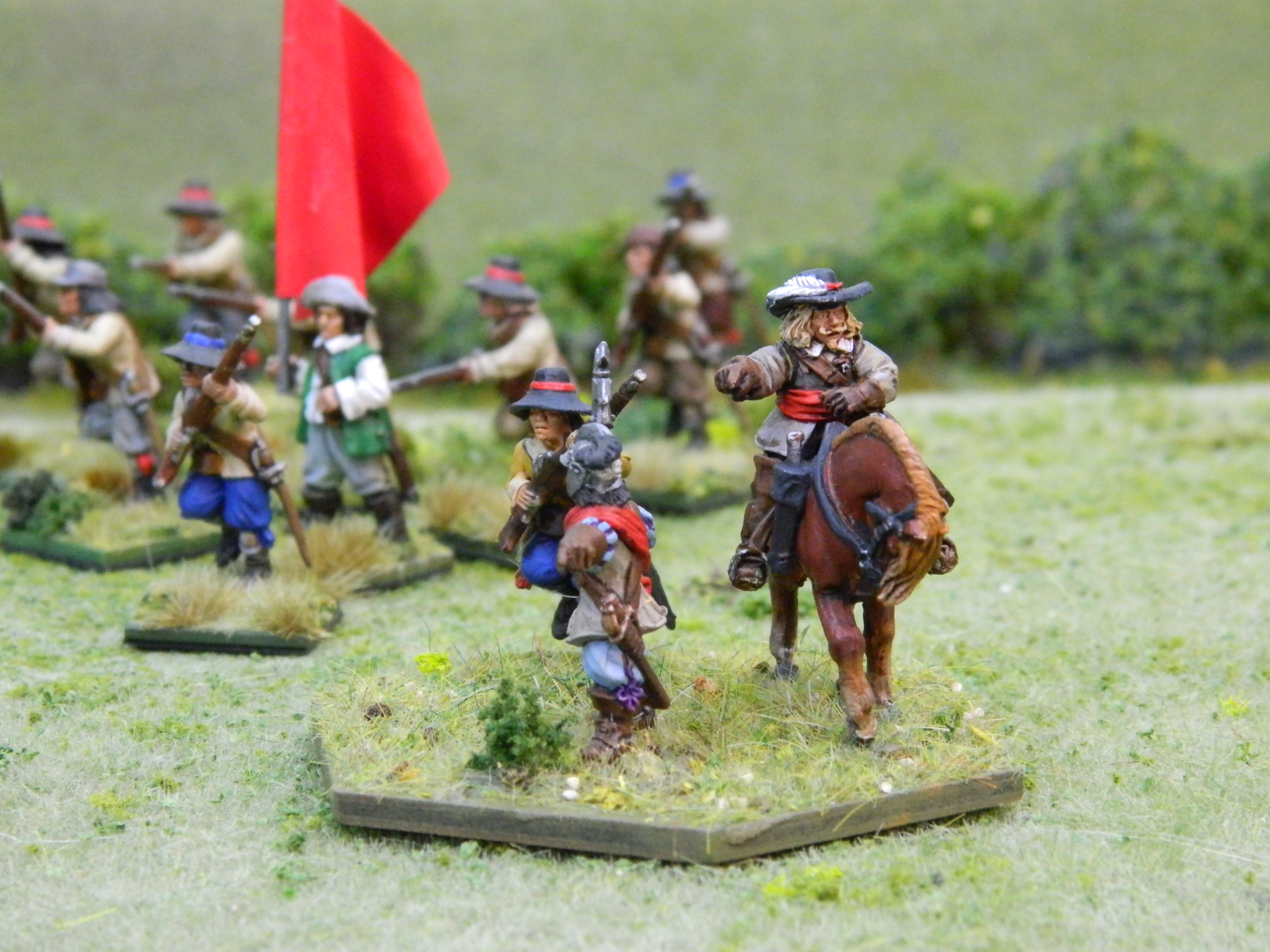 Carnarvon's own brigade was commanded by Sir Humphrey Bennett of which little is know except that he survived the war and went on to serve as a Justice of the Peace after the restoration.
(as you can see I was in the position of having to double up on commander models). 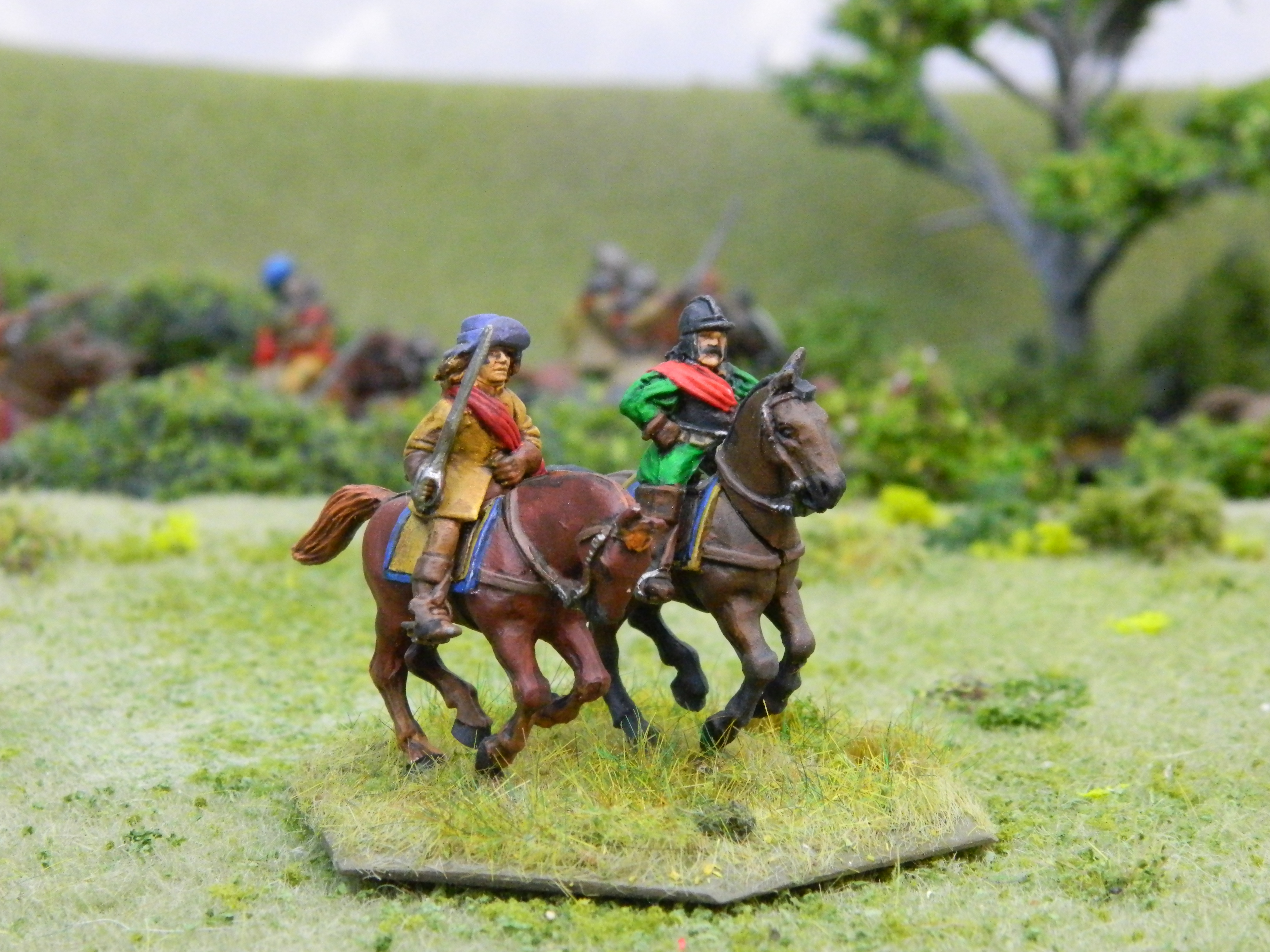 Last but not least, the left wing fell to Prince Maurice, younger brother of the charismatic Prince Rupert. Maurice started his military career in the Dutch army under the Prince of Orange. At 20 he had moved on to serving in the Swedish army before joining his brother in England in 1642. He came to the civil war with a reputation for bravery however as a commander he did not encourage discipline in his men who brawled with the Cornish infantry and were know to plunder. After the defeat of the king he was banished from England; he served in the Prince of Orange's army before following a career as a privateer, ultimately going down with his ship in a storm in the West Indies. 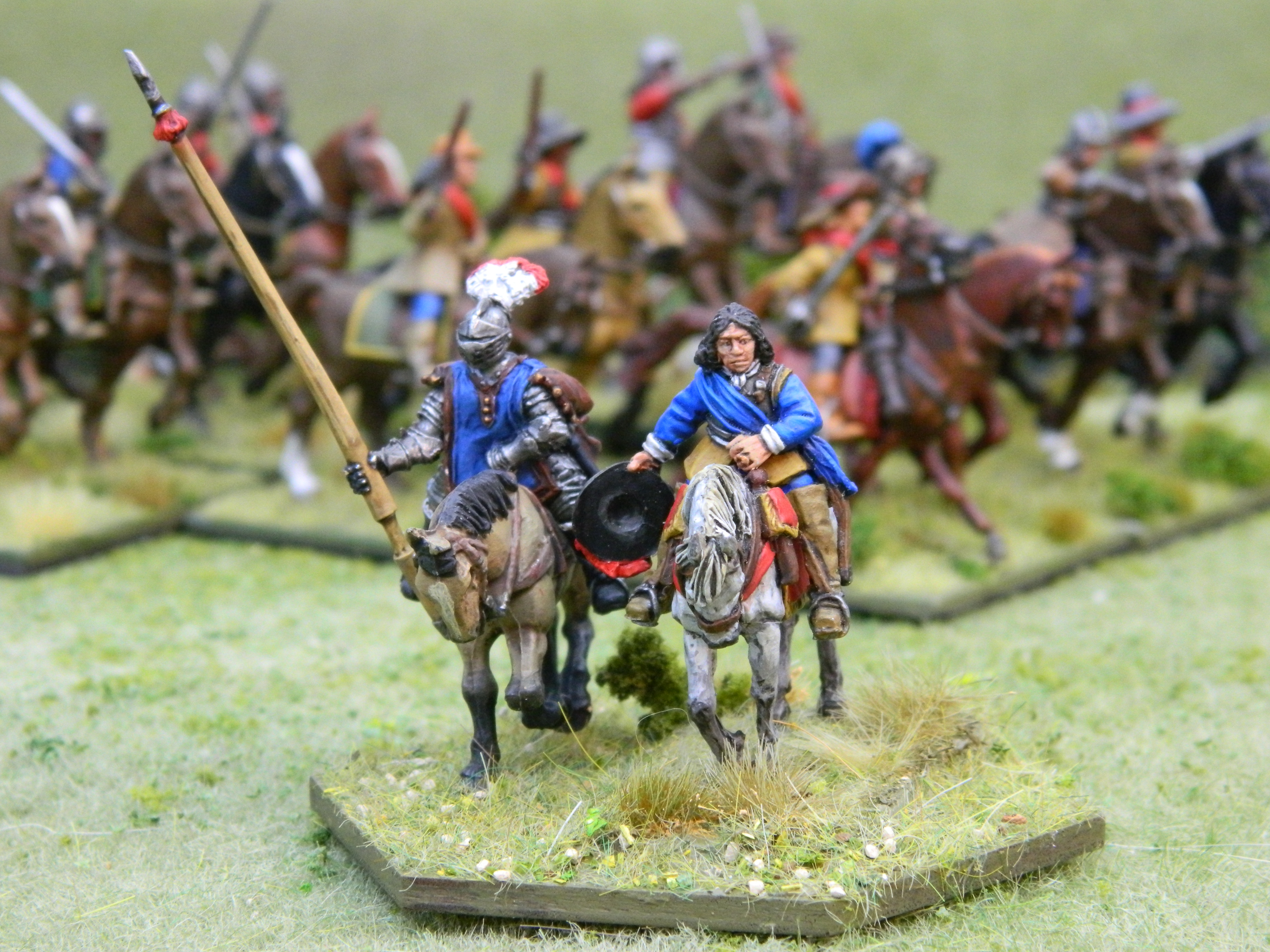 With the command stands sorted, onto Glastonbury.

With securing Bristol as his main priority, Waller decided to send an army under Col. Alexander Popham to keep his old buddy, Hopton, occupied. Hopton, struggling to keep his Cornish foot focused, saw the approaching Parliamentarian force as just the opportunity he needed to do so.

The two armies met each other just south of Glastonbury; Popham. however, found himself in the unfortunate position of having lost half his force to desertion due to an arrears of pay!  Choosing discretion over valour, Popham ordered the baggage and most of his foot back north leaving a rearguard to face the oncoming Royalists.

Here the Royalist are deployed in all their glory, Prince Maurice' regiment of horse in the foreground and Col. Trevanion by his foot, all hemmed in by hedges and muddy fields: 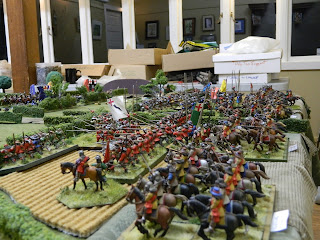 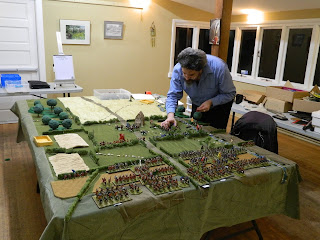 After choosing to run pell mell up hill into musket fire at Stratton, I chose a more conservative approach at Glastonbury, hoping to send off the raw Parliamentarian troops with my superior foot through volleys of musket fire. 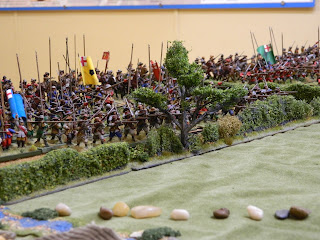 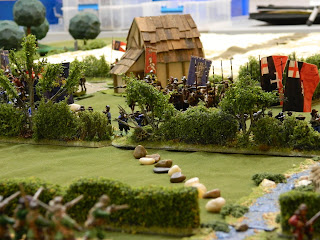 Just 3 raw regiments of enemy foot line the far hedge.  The stones represent the ditches that ran through the fields 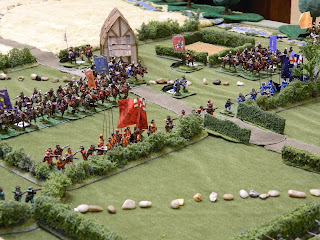 In turns 4 through 7, in a spectacular display of dismal die rolling, the raw Parliamentarian foot evaporated. Leaving just a few regiments of horse and some dragoons. 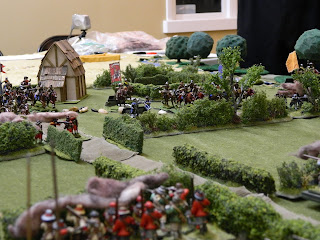 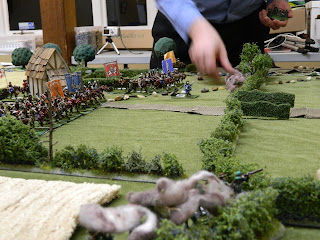 The plan worked... almost. Yes, the enemy foot disappeared but the horse was rock solid. Their position form which they refused to budge kept me from being able to clear the last hedge with my foot, thereby allowing my horse a chance at achieving their goal of exiting the far table edge (I needed to get 3 units off the table by turn 15 to get a minor victory).  Unfortunately the picture below shows as close as I got. 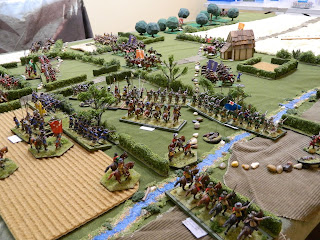 With my foot plugging up the centre, it seemed like my only real option was to get my horse moving up the flanks. This plan was stymied by freshly plowed fields, hedges and ditches. To add insult, the prize horse of this Royalist force- Prince Maurice's Regiment of Horse and Lifeguard of horse- were chased from the field! Aside from those details the result of our game was the same as the historical outcome: the defenders were able delay the attackers long enough for their baggage to get a safe distance away.

The next installment of this campaign looks to be a few months in the future as Murdock is all tied up through the balance of February, March and early April.