The Battle of Freezing Hill

The last Sunday of July saw Murdock and I resume our ECW campaign with The Battle of Freezing Hill, a prelude to the main event, Lansdowne Hill.

After scouting out Lansdowne Hill the previous day, Lord Hopton's Royalist force returned the following morning to occupy it only to discover that William Waller's army had ensconced itself at the crest of it in the meantime.

After deploying for battle and seeing the Waller had no intention of leaving Lansdowne Hill, Hopton retired towards Marshfield. Waller sent out a harassing force and Hopton was obliged to present some of his army as a rearguard; this battle is the result.

The Parliamentarian pursuit force made up largely of  small divisions of horse from Col. Robert Burghill's regiment of horse, the Gloucestershire Horse and Waller's horse... 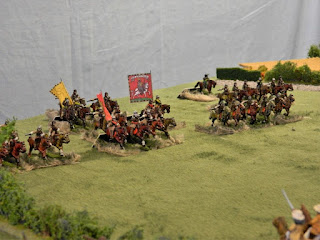 .... with Waller's Dragoons and the Somerset Dragoons sneaking up the flanks in amongst the hedges: 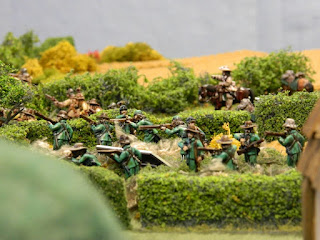 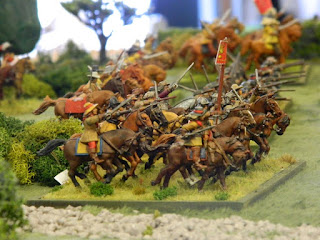 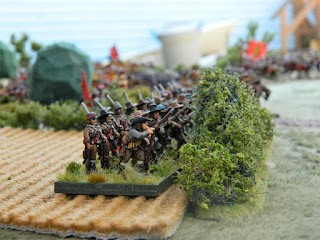 ...trading musket fire with Waller's and the Somerset Dragoons: 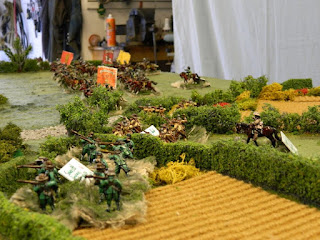 Parliamentarian reinforcements show up early (equal to or less than the turn number on 2D6- snake eyes on turn 2!) pushing forward and the Royalist's (Howard's horse) respond with getting the first charge in: 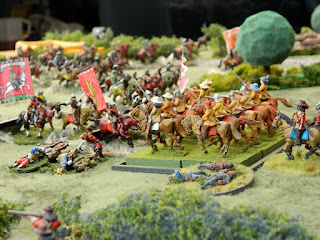 Surely a Standard sized unit of gallopers with a commander attached and rear support, charging a Small unit of trotters would win, right? Sigh.... the photo below show the defeated Howard's horse as it breaks for the table edge: 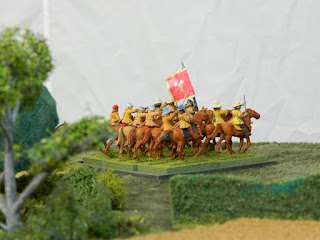 In the turn following, the Parliamentarian dragoons win their musket duel with Hopton's dragoons... 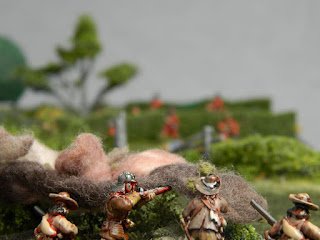 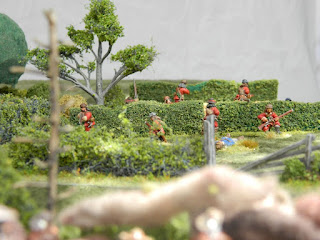 Eventually, the Royalist reinforcements arrive, in the form of Col. Trevannion's regiment of foot: 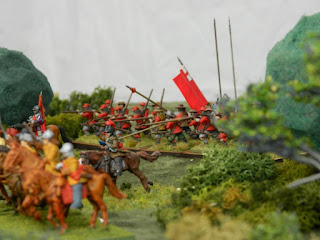 Not a moment too soon either as the Parliamentarian commander makes good use of his early reinforcements to start hemming the Royalist rearguard in: 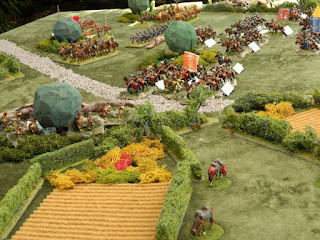 With the arrival of the foot, Bennet's brigade of horse immediately follow,  making the battlefield a little less forlorn for the Royalists: 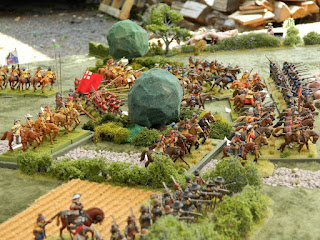 In the middle distance, the Royalist horse reinforcements move to fill the hole left by the defeated Howards horse: 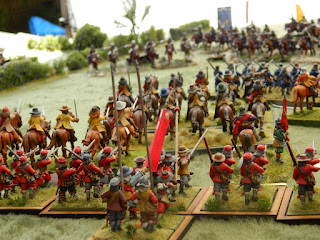 Carnarvon's horse, with support, look to chase Waller's dragoons from the hedges on their flank but come up short in the charge: 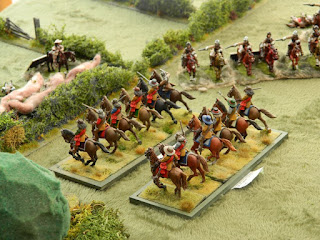 Thus, they are exposed to a charge in the flank; they are unable to turn to face but their support is: 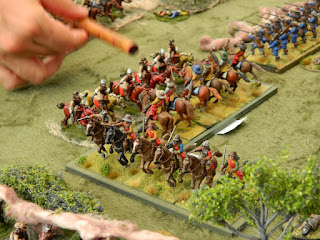 Although not a complete disaster, the veteran Carnarvon's horse are forced back.
Near the end of the game, this picture shows the Parliamentarian horse largely intact; the hole in the lower right recently vacated by Godolphin's commanded shot, breaking the Royalist foot battalia: 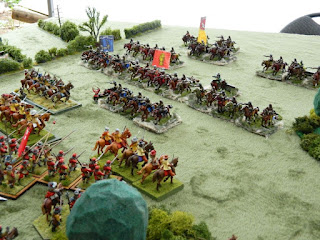 The final act of desperation by the Royalists, with the hope of inflicting some sort of damage on the Parliamentarian horse (who- on paper- were the inferior), is the charge of Howard's second unit of horse into their opponents. Nearly identical to the first charge of Royalist horse: a Standard unit of Gallopers, with flank and rear support charging a Small unit of trotters with only rear support. Sadly, an identical result as well as the snake eyes of the Break Test show: 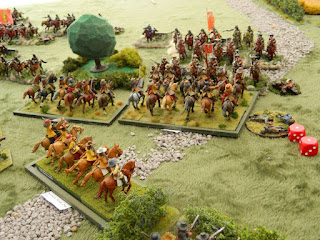 With that, 3 of the 4 Royalist battalia were broken and officers started ordering regiments off the field. The best performing regiment for the Royalists was Slanning's regiment of foot, shown below before being ordered to retreat: 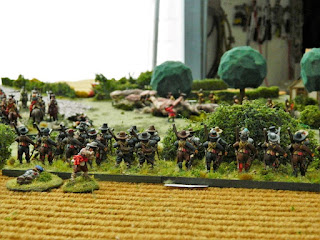 This game featured some wild die rolling from both parties right from turn 2 onwards. Oddly enough very few 3 move orders were rolled for on either side; the crazy die rolling seem to reserve itself for saves and break tests. In the past I have been a rather rash commander, a little reckless with my troops, however this time I was more conservative; sadly, my new approach did not change the Royalist's fortunes. Despite having the advantage of numbers and quality of horse I was unable to rack up a W. This leaves the Royalists 0-5 in our campaign series.

You will have noticed some different paint jobs on some of the Royalist horse; I had to pilfer some from Jeff's collection as I seemed to have misplaced about a dozen of my own. As before, we used Warlord Game's Pike and Shotte rules with amendments from To Kill A King. Something to note is that we have not been using Blunders; we started the campaign without them and decided to carry on as is. Next up is Lansdowne Hill, which should be interesting...

Edit: The Parliamentarian version of the battle is available here.
Posted by Codsticker at 09:21